Rome has the Coliseum. Pisa has its leaning tower. And Milan has – the Via della Spiga.

Milan actually has its share of cultural treasures, from the Teatro Alla Scala, to the magnificent Duomo, to the refectory of the Convent of Santa Maria delle Grazie where Leonardo Da Vinci painted The Last Supper.

But Italy’s second-largest city is still perhaps best known as one of the fashion capitals of the world, and that makes it a prime spot for marathon shopping.

To make sure you hit the highlights, consider a shopping tour. Viator, a tour provider, has five options, including a private three-hour tour.

Late last year, I opted for the private excursion. At twilight, personal shopper, Anna Maria Lamanna, met her fashion tourists in the Piazza del Duomo, Milan’s central plaza at the threshold of its storied, gothic cathedral.

In just a few steps, we found ourselves at Corso Vittorio Emanuele, Milan’s shopping strip. It was as festive as it was fashionable, teeming with eager shoppers on a cool Wednesday evening.

The dollar has been relatively weak against the Euro, and for the best bargains, U.S. shoppers would likely need to hop a bus or train to the suburbs where they could browse the outlets. (Viator also offers a few outlet-bound excursions.) But in several of the stores on and around Corso Vittorio Emanuele, clothes weren’t much pricier than their U.S. counterparts

One of the first stops was la Rinascente, a department store similar to Saks Fifth Ave. or Bloomingdales, where you can peruse the sartorial offerings of various designers and pick up a quick purse or skirt if you need to get fabulous in a hurry.

motivistoreinmilan
Tour guide Anna Maria Lamanna checks out the merchandise at Motivi. (Photo: Charisse Jones, USA TODAY)
Then there was Motivi, a trendy shop targeting the same young women who might frequent Zara or H&M back in the U.S. (Those stores are also in Milan). A pale green turtleneck, made of wool and alpaca, had a tag of roughly 69 euros, while a chic jacket could be yours for little more than 179 euros. Note that Italian clothing sizes are different, so a size 6 blouse in the U.S. will generally be a 42 at a shop in Milan.

One of the most striking aspects to shopping in Italy is the fabric quality at your fingertips. The wool is softer, the cashmere and angora more luxurious.

“We have the best fabrics in the world,” says Lamanna, noting that the proximity of various textile makers has helped make Milan a magnet for top designers, from Georgio Armani to Dolce and Gabbana. After all, she explains, that’s where the designs paraded on the runway begin. “The first thing is choosing fabrics for every collection,” says Lamanna.

In some shops, your fingertips might be the closest you come to actually feeling a garment. Customers are not always able to try on clothing, though shopkeepers on this particular tour were warm and amenable. “You can try on,” said one sales person. “No problem.”

Vergelio, is one of the most respected Italian shoe companies. The store carries various labels, from Valentino to Tod’s, but it also offers its own brand, renowned for its craftsmanship and comfort. The home brand also tends to cost a bit less – 200 euros for a pair of simple, elegant pumps for instance as compared to 470 euros for a pair from Tod’s.

For a dazzling, unique shopping experience, venture into Excelsior, a multi-story department store built in a one-time theater that proves more of a cinematic experience than a run-of the mill retail jaunt.

Black and white scenes of Milan unspool on the store’s walls as you ride by on escalators that are a tilted version of an airport’s automatic walkways, a somewhat futuristic version of the traditional moving staircases you’d find at, say, Macy’s.

Excelsior’s cellar is a tourist’s delight, filled with tastes of Italy to ferry back home – from prosciutto aged like wine to panettone. Fruits, meats and cheeses are arrayed like an art display. Meanwhile, wines are secreted in a glassed-in section that resembles a sleek, clubby lounge. The store has its own wine expert to guide customers through the dozens of bottles.

Upstairs, the clothing and accessories aren’t for the bargain hunter. A pair of buttery smooth leather gloves costs 72 euros. A gorgeous caramel-colored fedora made by legendary hatmaker Borsalino, sells for 150 euros. And that hooded black cape by Valentino made of 100% wool? That’ll set you back 3,000 euros.

The store might be a little off-putting to tourists, its rococo layout a bit tricky to navigate. On the first floor for instance, the makeup was displayed next to a selection of home fragrances, making it easy to mistakenly spritz your wrist with a perfume that’s actually meant for the living room couch.

“Not all people can understand this place,” Lamanna said, noting that the store’s design, like its aesthetic, is akin to a glamorous sound stage. “You have to imagine your movie.”

And if you brought your canine on vacation, your best pal can accompany you on your shopping jaunt since dogs are allowed in even the ritziest shops.

After a day of power-shopping, plan to head back to La Rinascente and its rooftop bar where you can sip an espresso or glass of prosecco as you gaze out at the Duomo. 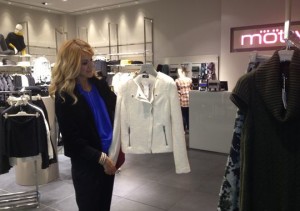 We may request cookies to be set on your device. We use cookies to let us know when you visit our websites, how you interact with us, to enrich your user experience, and to customize your relationship with our website.

Click on the different category headings to find out more. You can also change some of your preferences. Note that blocking some types of cookies may impact your experience on our websites and the services we are able to offer.

These cookies are strictly necessary to provide you with services available through our website and to use some of its features.

Because these cookies are strictly necessary to deliver the website, refuseing them will have impact how our site functions. You always can block or delete cookies by changing your browser settings and force blocking all cookies on this website. But this will always prompt you to accept/refuse cookies when revisiting our site.

We fully respect if you want to refuse cookies but to avoid asking you again and again kindly allow us to store a cookie for that. You are free to opt out any time or opt in for other cookies to get a better experience. If you refuse cookies we will remove all set cookies in our domain.

We provide you with a list of stored cookies on your computer in our domain so you can check what we stored. Due to security reasons we are not able to show or modify cookies from other domains. You can check these in your browser security settings.

We also use different external services like Google Webfonts, Google Maps, and external Video providers. Since these providers may collect personal data like your IP address we allow you to block them here. Please be aware that this might heavily reduce the functionality and appearance of our site. Changes will take effect once you reload the page.

This website uses cookies to improve your experience while you navigate through the website. Out of these cookies, the cookies that are categorized as necessary are stored on your browser as they are essential for the working of basic functionalities of the website. We also use third-party cookies that help us analyze and understand how you use this website. These cookies will be stored in your browser only with your consent. You also have the option to opt-out of these cookies. But opting out of some of these cookies may have an effect on your browsing experience.
Necessary Always Enabled
Necessary cookies are absolutely essential for the website to function properly. This category only includes cookies that ensures basic functionalities and security features of the website. These cookies do not store any personal information.
Non-necessary
Any cookies that may not be particularly necessary for the website to function and is used specifically to collect user personal data via analytics, ads, other embedded contents are termed as non-necessary cookies. It is mandatory to procure user consent prior to running these cookies on your website.
SAVE & ACCEPT
×